The aim of the Bonnyrigg Rose Football Academy is for all players to enjoy playing football whatever their skill level, whilst encouraging them to improve and become more creative. The Academy is for boys and girls aged between 5 and 8 years old.

The Bonnyrigg Rose Football Academy is organised into three years:

Year 1 – The introductory year. Training takes place on a Saturday morning for one hour. Players are taught the football basics: passing, dribbling and shooting. Each session will end with a 4 a-side game. Occasionally matches will be organised on Saturday mornings against other clubs in the local area. Currently this year is for players born in the year 2013.

Year 2 – Players train midweek improving their skills, learning basic tactics and becoming more creative. Matches take place on Saturday mornings for one hour, typically 10am or 11am. Currently this year is for players born in the year 2012.

After Year 3 – Players graduate from the Academy in November with their squads and coaches and go on to form Bonnyrigg Rose 7 a-aside teams. Currently this year is for players born in the year 2011.

There are 50 players in each year and they are divided into 5 squads. Each squad is assigned two Scottish FA trained coaches.

In Years 2 and 3 matches are played within the East of Scotland Soccer Development Association (ESSDA), either home or away. On match days each squad is divided into two teams of 4 players and 1 rolling substitute. Ten minute matches of football 4s are played against teams from other clubs. Typically all teams will play 5 matches each Saturday within a 1 hour period. The season lasts from March to November.

The Academy train at Poltonhall Bonnyrigg and play matches on Saturday mornings either home or away.

All players are provided with training and match day kits by the Academy. 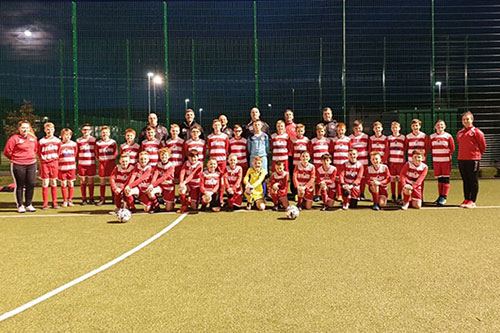